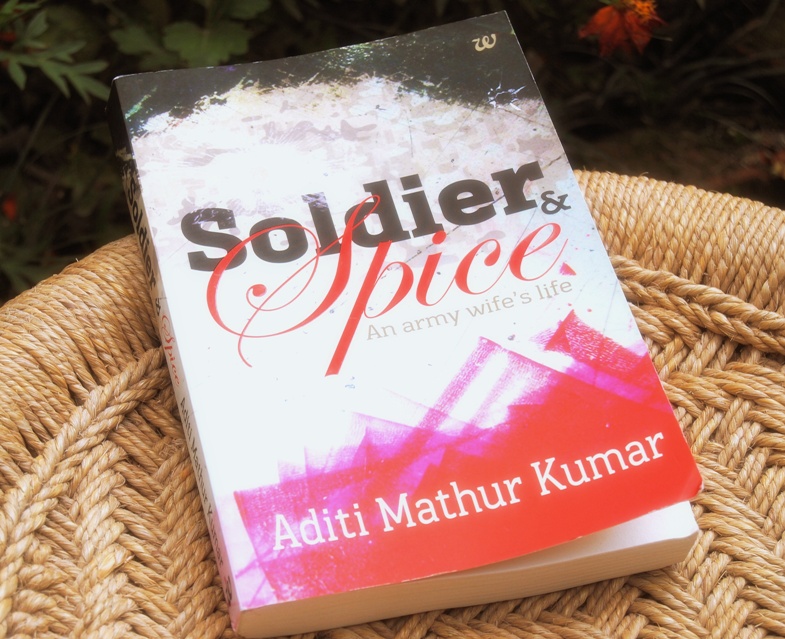 “And how are you finding Army life Pia?” Mrs Bhandari (the 2IC’s wife) asks me casually on our way back.

“It’s different,” I say, careful not to crib.

“And it’s a bit overwhelming,” I confess.

That is the central character of the book ‘Soldier and Spice’ talking. For all you know, the author could have written my name instead of ‘Pia’, and the entire conversation would still hold true.

You see, Pia is a civilian, married to an Army officer (hey! me too!). She is literally taken aback by this entirely different culture which Army follows rather strictly but has to learn quickly (same here!). She learns the “good, bad and ugly things” from every Army wife she meets (ditto!).

Author Aditi Mathur Kumar wrote this book about an Army wife’s first year in fauj and I want to sue her for stealing 90% of the content from my life. I can’t though, because I am completely in love with this book.

This book was recommended to me by one of this blog’s readers and I am glad I bought the book online (got it for a huge discount too, though I wouldn’t mind paying original price of Rs 250).

Ever since I started dating Captain Sa’ab, I was told by his then CO to read I married the Army by Doe Nair to get a feel of what life is like for an Army wife. Never the one to say no to reading a book, I promptly read it. Months later, I found Arms and the Woman by Deepti Menon, lying in a heap of books at the Daryaganj’s Sunday book market. 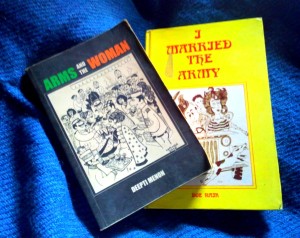 What these two books have in common is a very serious style of writing (very ladylike, befitting an Army wife) though it portrayed what Army life was like decades ago. A person like me found very little to relate to. Being a journalist and a writer who always welcomes a touch of humour, I thought the editing and presentation part of these books could have been a little different and appealing.

And this is where ‘Soldier and Spice’ scores high. It’s a story about an independent girl who feels a little suffocated initially in the Army, questioning every said and unsaid rule. It also shows the way wives of senior officers interact with young ladies. It was interesting to see how they are warming up to new ideas that involve Facebook and e-commerce, rather than sticking to the ‘song and dance’ sequence.

Aditi’s style of writing is very chic, humorous and truthful. I immediately called up Captain Sa’ab, who was away for a week-long camp, and told him what an amazing book it is. I also wanted to tell him to call up his former CO and suggest that he should recommend this book to all new brides from now on, but then decided against it.

‘Soldier and Spice’ is one of few books I have read A-Z in one sitting. A little credit also goes to Captain Sa’ab as well who is away for a week, which gave me time off from cooking meals. Waiting to see if Aditi comes up with a sequel. Hey wait! I’ll ask her myself, as I am meeting her soon. I found out just now that we live barely kilometres apart. See how small Army world is.