So where was I?

Aah yes, the Special Army Train had just arrived at our station at 12 noon. Check the first part here to get yourself up to speed (pun not intended).

The special Army train pulled up at the platform at the opposite end of the station — a platform which was not in use for other passenger or long-distance trains.

“Bas! Four more hours,” I thought about the departure time — that’s the time Major Sa’ab had said it will take to load the train.

Our entire Unit was moving from a field location to a semi-metro peace location, remember? Unit property and men were being transported via a special green-coloured Army train, with the officers, their families and Jawans being the only ones aboard.

It had a special train number and is managed by the railways only for the purpose of moving Armymen and Fauji property around the country — no, it does not show up on IRCTC website.

So, once the train arrived, Major Sa’ab, other officers, JCOs and ORs immediately got busy with ‘planning’ the next move. Planning is very important in fauj. Not just in war, but in loading a train as well. 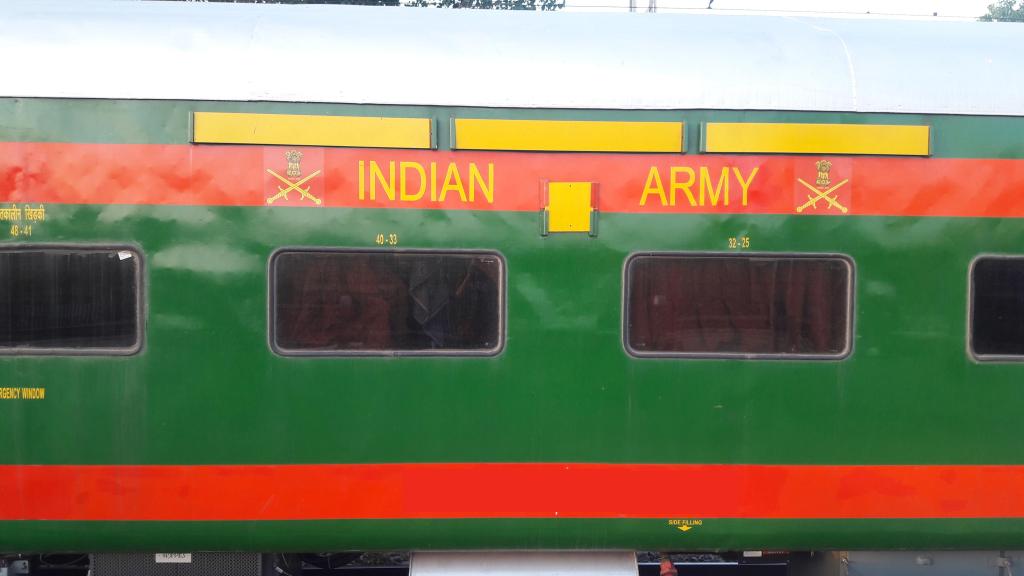 I came back to the guest room. As per my calculations, taking into account time taken for loading, lunchtime and tea time, we should be good to go by 1800 hours!

Nope! It seemed more like 1,800 hours before we managed to leave the station at around midnight. Here’s why…

I am sure that by 6pm the train was loaded, but then some paperwork had to be taken care of. It is, afterall, a sarkari matter. We lost a couple of hours to that.

It was dinner time by then, so why miss a chance of a readymade meal in the transit camp mess? And once the beer bottles were opened, it became obvious to me and CO Memsahib (we were the only two ladies left now) that the officers will delay our departure further by an hour.

We had waited for 5-6 days for this ‘son of a train’ to come, so a few more hours’ delay in departure is nothing! After dinner we went to the station, but were asked to wait for sometime at the platform. It was a small small station, only local trains stopped here.

So, you can imagine the kind of infrastructure they would have in place — which was nil.

There was no electricity, so CO Memsahib and I sat in dark, covered in three layers of Odomos cream to protect ourselves from mosquitoes.

It drizzled for 3-4 minutes, but we had honestly run out of fucks to give.

Once inside the train, we were thrilled to find that an entire coach had been alotted to officers and families. The bachelors took up one end of the coach, Major Sa’ab and I took up a middle compartment to give them (and us) ample privacy, and then after two empty compartments, the First Family of the unit set up camp.

It was May and the AC was a welcome blast. I was however, not so thrilled to know that the jawans were housed in sleeper compartments, with no AC.

Major Sa’ab assured me that the men were all rough-n-tough, and have seen worse. They will survive the heat as long as they got a place (and time) to sleep, he said.

So where was the hold-up now? Why the hell weren’t we moving?

We asked a young officer and turned out the delay was because of something I would have never imagined!

The senior officers didn’t like the order in which the train was laid out, and so they were busy ordering rearrangment of the coaches. The open coach was moved next to the officer’s coach; the pantry was positioned differently; jawans coaches were distributed throughout the train; ye coach idhar, wo coach idhar…. and it went on for another 2-3 hours.

You see, moving the coaches of a train is not like moving lego bricks — an engine had to be attached to everything that had to be moved and then “shunting” was done, which involved moving that coach to a different track, then making space for it on the original track, and then bringing it back to it’s rightful position.

Oh the whims some faujis have!

We hooted and clapped and congratulated each other the moment the train started. “Hurrraaaayyyyy!”

The officers, the ladies and the 8-year-old daughter of CO were all gathered on the open coach, taking in the cool breeze of the countryside. We chatted for sometime and decided to catch some sleep.

I had other things to worry about — high on that list being my leave which would end in two days. I had taken almost a week off from work, but we had wasted 5 days waiting for the train to arrive at our departure point.

“All this while you have been telling me that special army trains are known to take 5 days for a journey, and now you are saying that it will end in dedh din?” I fumed.

“Arre, see… we are already behind schedule, so I don’t think the train will go that slow. We’ll reach in time for your office, don’t worry,” Major Sa’ab assured me.

So, I had made up my mind to get off at the next city which had an airport, and catch a flight back to our destination — so that I do not overshoot my leave. Lady luck was on my side this time, since the next such stop would be New Delhi.

Next day, Major Sa’ab woke me up at 7am.

I am on leave, which means I owe to it the “vacation gods” to not wake up before noon.

In return, I got “that” stare from Major Sa’ab which is used by officers — in peace stations — to tell their wives that “Ab tum apni marzi ki maalkin nahin ho, ab Unit ke taur tareekon se bhi chalna padega.”

Welcome to peace postings — I thought. And woke up. And tried to make sense of this world. And hurled a few curses (mann-hi-mann) at Major Sa’ab. And had breakfast.

We all tried to find things to keep us occupied. The young officers were ecstatic on being in full mobile network and internet connectivity. Remember they were posted at a remote border location where one bar of mobile network called for celebrations.

We sat for sometime on the open coach and saw fields and rivers pass by. It was sunny, but the wind didn’t let us feel the heat.

In typical fauji fashion, at around 11, some snacks were served with chai. Then came soup. By lunchtime, I had already forgotten what it’s like to travel in a regular train — this one was so so so different.

Lunch was served at the bachelors’ end of the coach. My eyes popped out when I saw the elaborate set-up for lunch.

On one of the side berths, a camo print cover was laid out. And then there were the bowls and platters with the Unit crest, filled with food. All army wives know how food is served in officer’s mess, right? It was the exact same setting.

Plates, spoons, forks, napkins, and then 2 types of sabjis to choose from, a plateful of green salad… I really really wanted to laugh and roll my eyes at this typical “faujipanti”. It was all new to me… you see, I was expecting packed lunch boxes, like they serve in Duranto Express.

You can take a fauji out of the fauji area, but you cannot take the faujiness out of him!

Oh yeah, I forgot to tell you. We passed a station named Phillaur. It might seem like a useless piece of info for you, but at that time, it got us all excited because Anushka Sharma starrer “Phillauri” had just released.

The usual snack breaks were followed on the train as welll, like evening tea, soup, pakodas, etc. Dinner was an equally elaborate affair.

The train had to stop at a small village station in the evening, probably waiting for some other important train to pass and clear the tracks for us. The officers ordered the men to get down and run the entire length of the platform twice.

“The boys have to be kept occupied. They are used to physical activity everyday. We can’t let them sleep all day in the train. They have to be kept active na,” was Major Sa’ab’s explaination.

Train pe toh baksh do unko. This was my layman’s reaction.

In addition to men stretching their limbs, there were three dogs on board who had to be taken out on small walks. 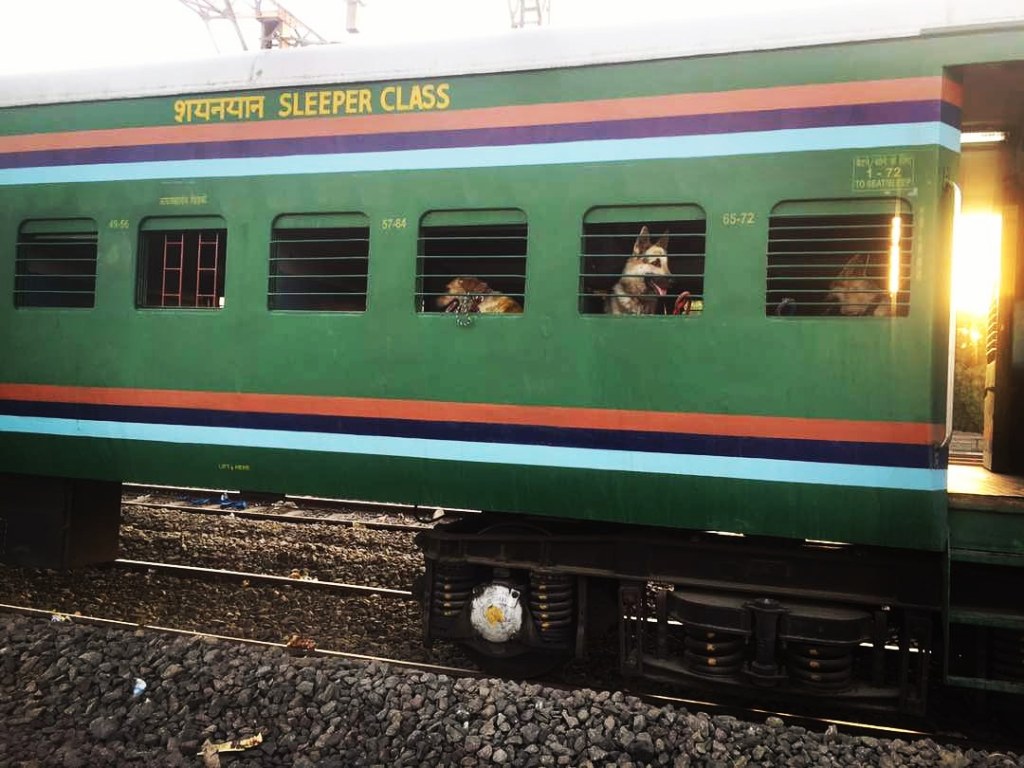 These three well-trained German Shephards were part of the unit property, and were faithful companions who had stayed with the men at the field location.

So we had men, women, children, pigeons (see Part 1) and now dogs on this Special Army Train! 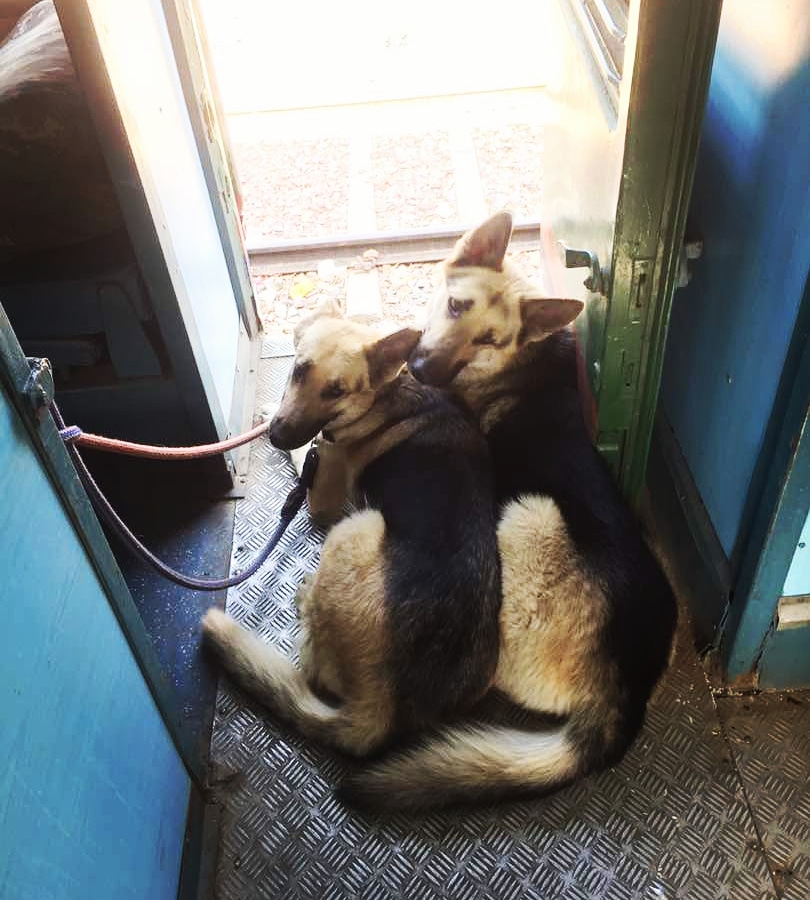 A young officer on attachment with Major Sa’ab’s Unit was excited about the entire journey because the train was to pass through his village and the CO had accepted his special request for a halt there.

Had the train been as per schedule, we would have reached his village in the evening of Day 1. The officer was, from what he told us, a ladla of his village and his family wanted to meet the officers and the jawans of their son’s Unit.

They had arranged for Chai, Samosa and Mithai for everyone at the station — yes, for everyone single person on that train.

Apparently a group of halwais were busy making the snacks for us at his village, which was to be transported to the station as soon as news of train’s arrival came.

Since we were woefully behind schedule, we could not reach his village on Day 1. He was a little upset, since some food had gone stale because of the heat. We hadn’t even reached New Delhi and his village the train’s next halt after the Capital.

At around 1 am that night, the train pulled up at snails pace at the Tughlakabad Railway Station, where I had to bid the special Army train a hasty goodbye.

I was leaving the journey midway since all my leaves were wasted in just waiting for it. My plan was to catch a flight from New Delhi, and resume work the next day.

On my way to the airport, I checked all popular travel websites for fares of early morning flights. Baap re… I realised what a bomb I would have to spend, but eventually remembered that being a family member of a fauji, I can get some cheeky discount from www.udchalo.com.

This website (if you don’t already know about it) gives awesome airfare deals to Armed Forces personnels and their family members (provided you have a dependent card).

So that night, I found that fares here were quite low compared to other websites, so I immediately started the booking process, but my dagabaz phone network vanished the moment I hit “Pay”.

I got a msg from my bank that money has been deducted, but didn’t get a booking confirmation.

I had reached New Delhi airport by that time, so I checked with the airlines who told me that they don’t have me on their flying list.

At that time, the UdChalo team did not have a 24×7 customer care service, so I panicked a little. I had to book that same ticket again, but thankfully the next day I got a mail from the folks at UdChalo that my erroneously deducted money will be refunded.

I missed half of the train journey, but the look of awe on my colleagues and friends’ faces when I told them about the experience was worth the trouble.

Hopefully, when the Unit moves to their next location, I would be able to enjoy the full journey, in full fauji tashan!