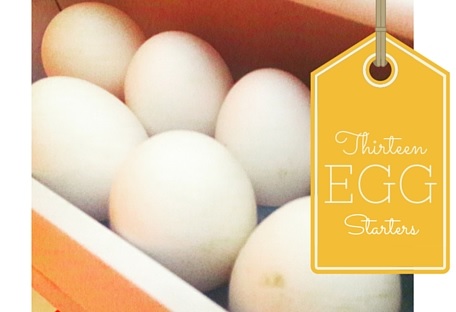 If those weekly egg trays that come in the ration are too much for your small family, then I am sure you are always on the lookout to finish off those 20-something eggs before the next batch gets delivered. Major Sa’ab and I had literally broadcast to the entire military station that we have extra eggs if anyone was falling short. We even had a tie-up with another  officer who had to buy extra eggs for his pet dog (not after we made a deal to send him our stock).

I later realised that it’s best to utilise the eggs during the numerous house parties that we had at our place. So invariably, the menu would have anda curry.

However, since we end up spending a bomb on the starters (the frozen variety), I thought why not put these eggs to good use in this department.

So here I have for you 13 egg appetisers or starters that will floor your guests. I am not very great with writing recipes and measuring ingredients, so I am just going to give you a general overview and you can use the services of Youtube to get the complete recipe from professionals! Also, I am not rambling here… I have actually taken the pains to cook these 13 dishes for you (to check feasibility)!

7 thoughts on “13 Egg starters to utilise those ration wale ande!”